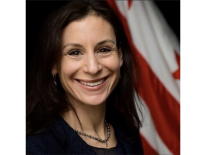 Laura Green Zeilinger has served as the Director of the Department of Human Services (DHS) since January 2015. In this capacity, Director Zeilinger is responsible for a 1,200-person agency that is charged with empowering every District resident to reach their full potential by providing meaningful connections to work opportunities, economic assistance, and supportive services.

In this role, Director Zeilinger has focused on implementing solutions to end homelessness, enhancing the system of supports offered through TANF, improving outcomes for youth who show signs of risk, and modernizing the Department’s customer service delivery model. Under her leadership, DHS launched a prevention program and other reforms that led to a 73% decrease in family homelessness between 2016 and 2021 while maintaining year-round access to shelter and developed a new model for shelter grounded in neighborhood-based, service-enriched programs. Working with stakeholders and Council, DHS implemented an overhaul of the TANF Program to end the 60-month cliff and better support families to meet their employment and education goals. In partnership with the Office of the Attorney General’s Office and law enforcement agencies, DHS expanded youth diversion programs that strengthening families and helping young people find a path to safe and healthy development. In addition, the Department completed a business process redesign for the administration of benefits that resulted in approximately 85 percent of applications, renewals, and changes being completed at the first customer interaction at ESA Service Centers.

Director Zeilinger is an attorney with a long-standing commitment to underserved populations. Prior to re-joining DHS, she served as the Executive Director of the United States Interagency Council on Homelessness (USICH), where she was responsible for the implementation of Opening Doors: Federal Strategic Plan to Prevent and End Homelessness, an effort that includes the coordination of Federal homelessness policies among 19 Federal departments and agencies, as well as partnerships with State and local communities, non-profits, and the private sector. She joined USICH in 2011, having previously served as Deputy Director.

Previously, Director Zeilinger served at DHS as Deputy Director for Program Operations. There, she led the creation of more than 1,000 units of permanent supportive housing as part of the Homeless No More Plan and designed and implemented the District’s Housing First Initiative. Prior to her work with DHS, Director Zeilinger served as the Mayor’s liaison to DHS and the Office of Disability Rights. She has also led international economic development efforts, managing a technical assistance project to reform the pension system in the Republic of Kazakhstan.

Ms. Zeilinger is an alumna of Sarah Lawrence College and a graduate of the Washington College of Law at American University. She and her family have lived in Washington, DC for over two decades.